I Have Prostate Cancer. How Long Will I Live?

According to cancer.net, “A cancer diagnosis often brings concerns about how long your life will be.” Even though prostate cancer (PCa) is not as life-threatening as some other tumor cancers, PCa patients who have just been diagnosed may still encounter fear of death. Yet, the odds of dying from something other than their cancer are overwhelmingly favorable, especially when diagnosed with low-risk disease.

The National Cancer Institute’s SEER database indicates that in 2021, it was expected that 248,000 new cases would be diagnosed. PCa represents 13.1% of all new cancer cases annually, yet death due to PCa accounts for less than 6% of all cancer deaths (about 34,000 PCa deaths per year). SEER shows:

Of course, mortality varies according to risk factors, but the above data, especially falling death rates, should reassure newly diagnosed men. Thanks to better screening through PSA + multiparametric MRI (mpMRI), most cases are now found when can be treated with the greatest success. Also, biomarkers and genomic tests help us identify PCa that appears to be low-risk but in fact behaves aggressively—up to roughly 17%[i] of all cases—but advances in treatment are improving outcomes for these patients.

At the 2021 meeting of the Society of Urologic Oncology (December 1-3,), a paper was presented entitled “Patterns of Mortality After Prostate Cancer: A SEER-Based Analysis.” Using the same database cited above, the presenters drilled more deeply into the case numbers.[ii] They analyzed 116,796 prostate cancer cases diagnosed between 1992-1997 and followed them until 2017. What’s important about this study is the population size as well as the 20+ year followup. However, what’s problematic about it is that life-extending advances were occurring during the two decades in which death rates were tracked.

The presenters reported that over half (55.6%) of the deaths occurred among men initially diagnosed with low-grade PCa, mostly more than 5 years after diagnosis (54.3% of those with high-grade PCa died within 5 years). Compare the long-term survival rates between older men at diagnosis (average age 67) vs. younger men (below age 60):

Younger men have better cancer survival rates. “Overall, the annual prostate cancer-specific mortality (PCSM) rate was 1.5%, but the rate increased with age at diagnosis, from 0.9% among men younger than 60 years to 1.2% and 2.1% for those 60-70 and older than 70 years, respectively.”[iii]

The presenters disclosed that they favor a theory that low-grade PCa may actually have the ability to spread early (before it is even diagnosed), “…followed by a long period of dormancy, subsequent dormancy, and reactivation and metastatic spread leading to cancer mortality.”[iv] While their analysis of long-term PCa-specific survival appears to support this theory, we believe it will take many more years of follow-up and analysis to determine its validity. After all, 20 years ago urologists were still performing TRUS sextant biopsies (only 6 needles), gradually switching to TRUS biopsies with 12 or more needle. Notoriously, TRUS biopsy has and error rate of 30% or more at overdetecting insignificant disease while under detecting significant disease. Thus, many men diagnosed with low-grade PCa actually had higher grade disease that would have been more likely to have already spread. Even after prostatectomy, recurrence can show up as late as 10-15 years after surgery, so some disease genuinely seems “dormant.” Yet, PCa cell lines behave differently, and patients have different genetic mutations, so we still have much to learn.

There is no doubt that PCa death rates have been decreasing. We are optimistic in our strong belief that

today’s newly-diagnosed PCa patient has a very high probability of living out his full lifespan. While no human being can know their exact lifespan, the improved diagnosis and treatment landscape for prostate cancer patients promises longer life than ever before. For more information, contact the Sperling Prostate Center. 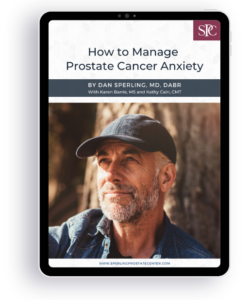 If Dad Had Prostate Cancer, Will I Get It Too?