The following video and written testimonials reflect a range of experience with detection, diagnosis, treatment and recovery services at the Sperling Prostate Center. Variances occur due to patient age, baseline function, general health, and prostate cancer clinical factors. As with all prostate cancer treatments, results are not guaranteed.

Sperling Prostate Center patient Ray (along with his wife) shares his story of prostate cancer diagnosis and successful treatment with focal laser ablation treatment at our facility in Florida:

Explore reviews from around the web

More treatment stories, in our patients’ own words

“My journey to find Dr. Sperling started with the fateful words: You have cancer. I was fortunate to get hooked up early-on with The Georgia Prostate Cancer Coalition whose mission is to help newly diagnosed individuals understand what treatments are available. Their members helped me talk my way through the options—which all sounded terrible—without being judgmental…”
» Read more about Steve’s treatment journey

“My name is Kevin. I’m 58, and my wife Patricia and I have been married for 35 years and lead very active lives. When I went for my annual physical in June, 2011 my PSA had risen to 4.6. My doctor referred me to a local urologist, and in August I had a standard TRUS biopsy of 12 needles…”
» Read more about Kevin’s story

“The urologist gave me two basic choices: prostatectomy or radiation. I consulted a robotic surgeon and a radiologist. I wanted more information about the exact location and nature of my cancer, but neither of them seemed willing to pursue further diagnosis…”
» Read more about Warren’s story

“I am a 67 year old active male and I was diagnosed with prostate cancer in early September of 2009. After 2 trus biopsies and years of watchful waiting my urologist suggested another biopsy. The pain of the biopsy was too much and the options of surgery and radiation was something I wouldn’t consider unless it was my last option. I did a ton of research on focal laser ablation and soon after met with Dr. Sperling. He answered every question I had, was a really nice guy, and made me feel comfortable. I went through with the procedure. It took 45 minutes and I felt absolutely no pain. It’s been 2 years: cancer free and still no side effects. From me and my wife, Thank you Dr. S.!”

Follow-Up and Gratitude from our Patients

Dewayne: A Note of Gratitude 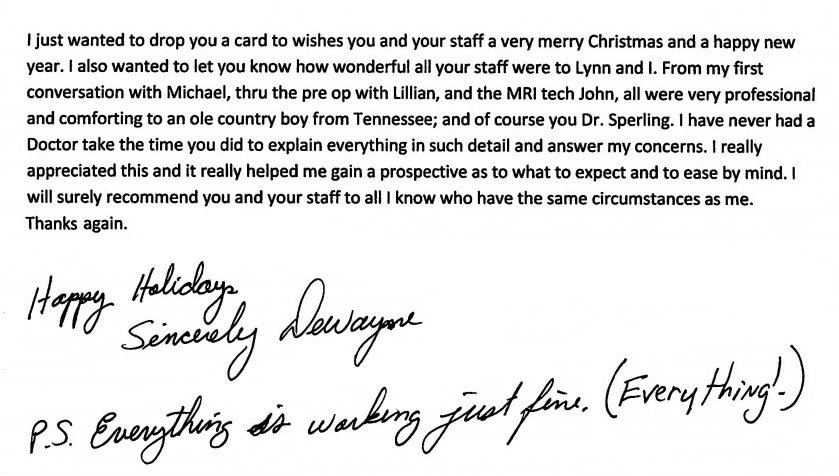 “Dr.Sperling: So far, I must report that I have had no side effects from the procedure, including bleeding. I was back to 95% on day 1 and 100% by day 2. It is beyond me that more men are not pursing this option. Obviously they don’t know about it, or if they find out about it they are being advised, as I was, that the procedure is too new and untested. One would think they would get the logic—If it can’t hurt you it is worth a try. A person can always do something more radical. Also, it would seem to me that MRI biopsy should be the standard.”
– Harry