A popular model kit for science-minded kids is called “The Visible Man.” It was patented in 1961, and for generations of kids who wanted to be a doctor when they grew up, it was a chance to assemble a 3-D human being from the inside out. The finished view through its clear plastic skin showed bones, muscles, organs, and major blood vessels for pretty much the best anatomy lesson ever! In fact, if there’s truth in this early advertisement, doctors also took advantage of the kit, perhaps to teach their patients: 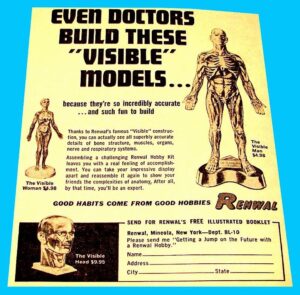 Today, state-of-the-art imaging is also a way to see into the body as if its outer skin were transparent. MRI and other modalities have all but eliminated exploratory surgery as a way to examine internal structures for the presence of cancer. However, when it comes to a solid cancer tumor-like prostate cancer (PCa), imaging has a limitation: it is not a definitive diagnosis. If multiparametric MRI detects a suspicious area, it can reveal the size, shape and location of the lesion—and even help identify if it is significant PCa or not. Even so, a needle biopsy is still required to analyze the cells in tissue samples.

Needle biopsy of the prostate is generally done through the rectal wall, and placement of the needles is guided by ultrasound. In addition to being invasive and often painful, it is subject to sampling error because ultrasound cannot distinguish cancer tumors from healthy tissue. It also comes with a risk of infection from potential contamination with bowel bacteria. Thus, it’s often inaccurate with the result that thousands of men are treated either too aggressively, or not enough.

Recently, the FDA approved for human clinical trials a new MRI contrast agent for the detection and diagnosis of prostate cancer. Contrast agents are routinely used in imaging to enhance and clearly define abnormalities such as tumors. It has taken 15 years to research and develop this new agent, called MT218. It relies on a silvery-white element called gadolinium, which is currently widely used as an MRI contrast agent in a chemically altered form that makes it safe for human imaging.

What sets MT218 apart is a molecular formulation that targets a particular biological property of cancer cells. As part of a cancer cell’s function, it overexpresses a specific multifunctional adhesive protein called fibronectin that helps regulate the cancer cell’s growth metastasis. MT218 is designed to bind with each cancer cell’s fibronectin. During the MRI scan, it’s like casting a spotlight on the precise tumor as the contrast-loaded cancer cells “light up.” In turn, this means improved accuracy in determining whether a patient’s PCa is insignificant (does not need immediate biopsy) or significant (needs immediate biopsy). If a biopsy is needed, the MT218 scan acts as a GPS navigation tool for an MRI-guided targeted biopsy, which needs only a minimum number of strategically placed needles.

The FDA has now approved MT218 for human clinical trials, a necessary step for establishing that it is safe and effective in achieving its goal. As reported in the April 15, 2021 Diagnostic Imaging news bulletin, “The Phase 1 clinical trial is set to begin in May at Ohio Clinical Trials Inc.” The research team plans to enroll 30 healthy men between the ages of 18-55.

MT218’s developer, Zheng-Rong Lu, Ph.D. (Case Western Reserve University) is excited about the possibility of employing MT218 to differentiate between men who don’t need a biopsy vs. those who do; of those who do undergo biopsy, their diagnosis is likely to be more accurate, allowing for the best treatment match. He remarked, “Research shows that only 20 percent of patients diagnosed will develop aggressive tumors – so we could spare the other 80 percent from aggressive over-treatment.”

Even more exhilarating is the long-range vision of “seeing” through the outer layers of body as if they were transparent, with a noninvasive scanning method that results in an accurate diagnosis. It may be a journey of many years, but MT218 is a promising step on that pathway.

Back Down, TRUS Biopsy. MRI-Targeted Biopsy is Better.