Advanced prostate imaging is accelerating an important evolution in biopsy technologies. Ultrasound and MRI are the two main types of imaging used to aid prostate cancer diagnosis. In particular, the use of multiparametric 3T MRI is creating a huge change in prostate cancer detection and diagnosis because of its superior imaging ability over ultrasound.

Prostate ultrasound is done using a wand inserted into the rectum. Thus, it is called Transrectal Ultrasound, or TRUS. The wand transmits soundwaves through the rectal wall toward the prostate gland. The waves bounce off of different kinds of tissue, and register as black-and-white images on a computer monitor. Although abnormal prostate tissue may show up differently than normal tissue, the information about the true nature of the abnormality is limited. 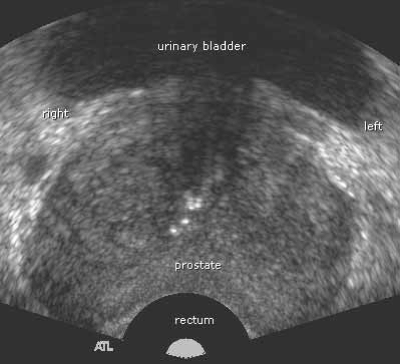 Fig. 1a: A typical TRUS transverse view of the prostate (front to back) shows the shape of the gland. 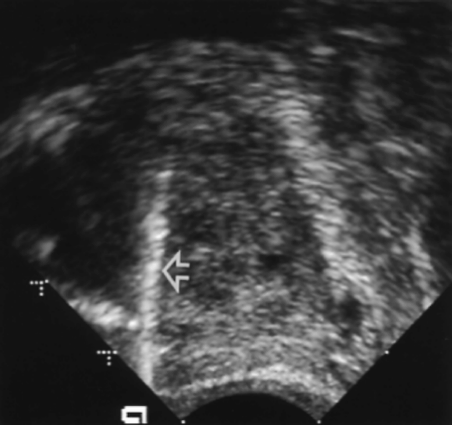 Traditionally, prostate needle biopsies have been performed by urologists under ultrasound guidance.

Experts agree that MRI is the “most sensitive imaging technique in relation to other imaging technologies at this time.”[ii] Today’s features include a number of parameters (multiparametric MRI or mpMRI) captured by a powerful 3 Tesla (3T) magnet that reveal much more than just prostate anatomy, enabling visual definition of even small prostate cancer tumors:

In addition to these multiparametric indicators of a cancer, our powerful 3T (3 Tesla) magnet provides very high resolution of tumors.

Studies designed to correlate tumors identified by mpMRI in pre-prostatectomy patients confirm the accuracy of the MRI images when read by an experience radiologist, then compared with the surgically removed prostate specimens. According to an authoritative Dutch center, “Multiparametric (mp)-MRI has been shown to be highly accurate in detecting and localizing intermediately aggressive and highly aggressive cancers.”[iii] However, they caution that the experience of the radiologist conducting prostate MRI is crucial to how well images are captured and interpreted according to the highest standards. 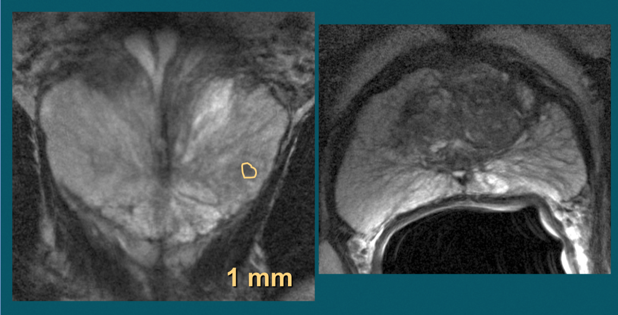 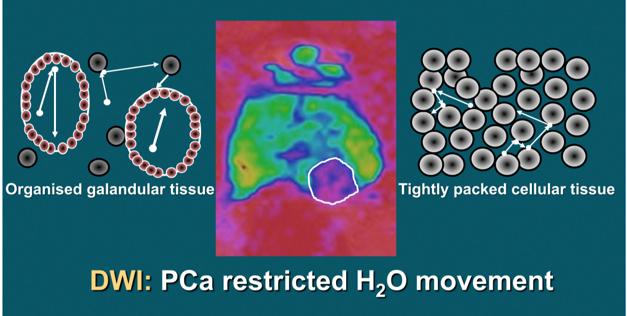 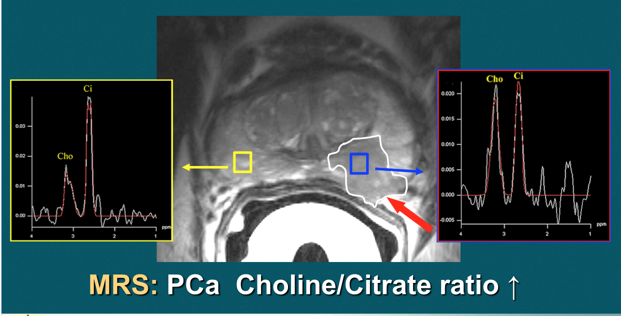 Fig. 2c: Spectroscopy improves the definition of cancer by revealing the presence of certain chemicals that indicate malignancy 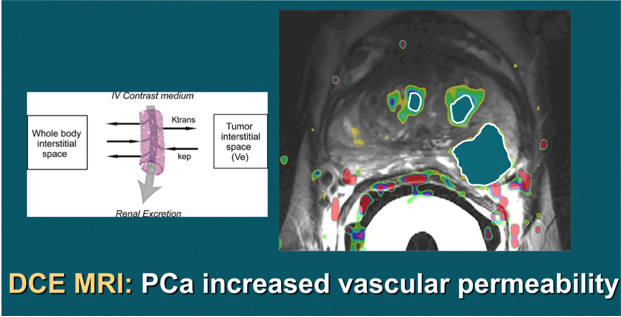 Fig. 2d: DCE shows changes in the uptake and washout of an injected contrast agent by cancer cells

A biopsy done under real time MRI guidance in the bore (tunnel) of the magnet, especially by an expert, is the most precise and efficient biopsy available.

Fusion of ultrasound and MRI

Fusion is a fluid process that involves “de-forming” an image and warping it to blend with the form of another. For medical purposes in the prostate, fusion merges previously captured MRI images with live TRUS images while the ultrasound wand is inserted. Only a very small number of U.S. urologists have the necessary knowledge, equipment and software to do fusion, and there are several fusion device manufacturers in the marketplace that may not be equal in performance.

How does it work? Prostate fusion imaging is usually done in the urologist’s office to help identify the target area for the biopsy. The urologist must be specially trained to read prostate MRI and identify the area of interest (suspected tumor). The urologist must also “segment” or input the prostate outline into the computer to facilitate matching MRI and TRUS shapes. Special software is necessary that can recognize both types of images, assign “coordinates” to each type, and match (register) the images coordinate-by-coordinate. This is called image registration or co-registration, and it overlays the live TRUS image onto the static MRI image. The result a synthetic 3D image of the patient’s gland that is quite accurate, but not perfect due to possible error artifacts such as patient movement, inaccurate segmentation, etc. The final 3D image can be manipulated on the computer screen so the urologist can view it from every angle, and the suspicious area is highlighted within the image.

To get the idea, imagine you insert several photos of your face from various angles into a computer that can scan and read them. Now imagine a friend taking a video all around your face, and the video image inputted into the same computer, which matches the live video with the still photos. The computer now blends all the images and creates a 3D view of you that looks like a Pixar image of yourself. Your friend can use the computer mouse to rotate the Pixar image of you from different angles. The resemblance may be quite remarkable, but there may be some slight differences or distortions.

Experts agree that targeted fusion-guided biopsies are generally more accurate in detecting and diagnosing prostate cancer than traditional TRUS biopsies. Depending on the software or fusion device, the computer may help plan the sampling based on the target area(s) within the gland as depicted in the fused images. The urologist who is using fusion technology can follow the plan, or override it. This includes the number of needles, and the angle of approach. The TRUS verifies the placement of the needles, which show up on the monitor.

The Sperling Prostate Center offers patients the safest, most efficient and accurate biopsy process available. Guided by real time 3T multiparametric images, under the direction of the radiologist with most U.S. experience in MRI-guided biopsies, the results offer a significant degree of confidence over other biopsy methods. As van de Ven and Barentsz point out, “Direct MRI-guided biopsy is likely to be the most accurate technique as it is less prone to fusion and motion errors.”[iv]

It is our belief that the fusion-guided biopsy is a positive addition to the field of urology, helping urologists bring targeted biopsies into their practice. However, we also believe that MRI imaging done live, in real time, has no substitute. There is no need for a “middle man” like fusion, with its extra steps (and therefore room for some distortion).